Freedom of Marriage for All

Freedom of Marriage for All

About us (Marriage For All Japan) 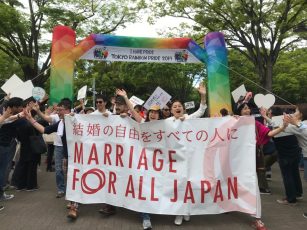 Marriage for All Japan (MFAJ) is an organization established for the purpose of achieving marriage equality (same-sex marriage). With the exception of the two secretariats, all members work on a pro bono basis.

the first is to provide full support for the same-sex marriage lawsuits currently underway in five courts; the second is to urge Diet members to amend the law; and the third is to raise public awareness (events, information dissemination, media relations, collaboration with companies, video production, research, etc.).

In addition, not recognizing same-sex marriages is the same as the government sending out a negative message that “same-sex couples do not need to be recognized as a legitimate relationship,” thereby promoting discrimination and prejudice against same-sex couples and sexual minorities.

Not recognizing same-sex marriage not only denies same-sex couples the legal right to live their daily lives, but also continues to violate the personal dignity of sexual minorities.

However, we thought that in order to make same-sex marriage a reality as soon as possible, we should not only file a lawsuit but also conduct a campaign to raise public awareness at the same time. MFAJ was established as a group of volunteer lawyers with some non-lawyer members to conduct the campaign. MFAJ is made up of people who have been working for sexual minorities rights for a long time.